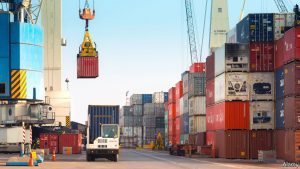 The trade balance bounced back to a surplus in May following a large deficit in the previous month as a drop in exports was followed by a steeper decline in imports, Statistics Indonesia (BPS) announced on Monday.

The surplus was recorded at US$210 million last month, standing in stark contrast to the $2.29 billion deficit recorded in the previous month, the largest deficit since 2013.

Between January and May, however, the trade balance was recorded at a deficit at $2.14 billion, a slight improvement from the $2.87 billion deficit booked over the same period last year.

BPS head Suhariyanto said in Jakarta on Monday that May’s surplus was a step in the right direction following recent deficits.

“The [trade] surplus was good despite it not being ideal. [In May] exports dropped followed by a steeper decline in imports,” he said.